Rin Rin (りんりん) first appeared in Mad World as a boss opponent. She is a part of a clan called the Crimson

Dragon which is supposedly a clan of assassins, but it is never elaborated on. When you first encounter her in Jack's campaign, she claims that the Crimson Dragon has ordered him dead and she is honor-bound to see it done. She uses twin fiery blade-fans, christened Yanlong, to slice and ignite her foes. She is the middle sister of Fei Rin and Ai Rin. 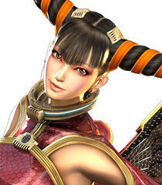 Rin Rin in Anarchy Reigns
Add a photo to this gallery
Retrieved from "https://parody.fandom.com/wiki/Rin_Rin_(Anarchy_Reigns)?oldid=2425837"
Community content is available under CC-BY-SA unless otherwise noted.