Rita is a character from Oliver and Company.

She is an animal expert

She is a young girl and Gru's eldest adopted daughter.

She played Mrs. Donner in Tramp the Red-Nosed Dog

She played Foo-Foo in The Children Show (The Muppet Show)

She played Vonna in The Naked Cage (PrinceBalto Animal Style)

She is a beautiful she-bear

She is Paul's concerned mother

She played Princess Jasmine in Dodgerladdin

She played Nana in Jiminy Pan

She played Krista in Skippy in New York

She is Robert's girlfriend and helper

She is a beautiful woman

She is a woman from the Earth Kingdom

She played Cinderella in Ritarella

She played Lady in Rita and the Dodger

She played Shantae in Rita and the Pirate's Curse and Rita: Half Genie Hero

She played Princess Tiana (Frog) in The Princess and the Dog

She is a frog

She works for Hades

She played Sarabi in The Tramp King

She is the mother of Simba

She played Sally Acorn in Dodger the Dog (SatAM)

She is a Squirrel/Chipmunk Hybird

She played Kevin in Up (NimbusKidsMovies Version)

She is a bird

She was trained by Thanos to be an assassin. Later she redeems.

She played Click the Camera in GO Christopher GO! 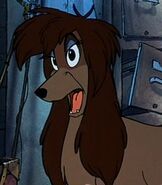 Add a photo to this gallery
Retrieved from "https://parody.fandom.com/wiki/Rita?oldid=2372311"
Community content is available under CC-BY-SA unless otherwise noted.