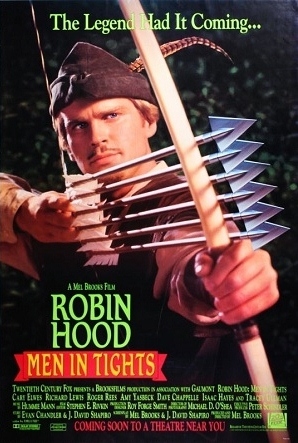 Robin Hood: Men in Tights is a 1993 French-American musical adventure comedy film and a parody of the Robin Hood story. Produced and directed by Mel Brooks, the film stars Cary Elwes, Richard Lewis, and Dave Chappelle in his film debut. The film includes frequent comedic references to previous Robin Hood films (particularly Robin Hood: Prince of Thieves, upon which the plot is loosely structured, Disney's Robin Hood, and The Adventures of Robin Hood).

Robin Hood, or Robin of Loxley (Cary Elwes), is captured during the Crusades and is imprisoned at Khalil Prison in Jerusalem. With the help of fellow inmate Asneeze (Isaac Hayes), who is in for jaywalking, he escapes and frees the other inmates. Robin is asked by Asneeze to find his son, Ahchoo (Dave Chappelle, in his first major professional role). Upon returning to England, he finds Ahchoo and discovers that Prince John (Richard Lewis) has assumed control while King Richard is away fighting in the Crusades. Unbeknownst to Richard, the prince is abusing his power. Robin returns to his family home, Loxley Hall, only to find it has been repossessed by John's men. His family's blind servant, Blinkin (Mark Blankfield), informs Robin that his family members and pets have been killed as well. He vows to get his home back before all his family's things are taken.

Robin recruits the large and ignorant Little John (Eric Allan Kramer), and his friend Will Scarlet O'Hara (Matthew Porretta), to help regain his father's land and oust Prince John from the throne. On his quest, Robin also attracts the attention of Maid Marian (Amy Yasbeck), who wants to find the man who has the key to her heart (and Everlast chastity belt). They are also joined by Rabbi Tuckman (Mel Brooks), who shares with them his sacramental wine. While Robin is training his band of tights-clad Merry Men, the spoonerism-spouting Sheriff of Rottingham (Roger Rees), hires the Mafioso Don Giovanni (Dom DeLuise) to assassinate Robin at the Spring Festival (with archery tournament), spoofing a similarly outlandish plot twist from the Costner movie involving Scottish mercenaries. Maid Marian hears of the evil plot, and sneaks out of her castle to warn Robin, accompanied by her frumpy German Lady-in-Waiting Broomhilde (Megan Cavanagh). The Sheriff and Don expect that Robin will not refuse a chance to participate in the tournament due to his pride, and Robin does as they expect.

At the archery tournament, a disguised Robin makes it to the final round, where he makes his shot but loses to his opponent. Robin calls this situation absurd, takes off his disguise and pulls out a copy of the movie's script to discover that he gets another shot. The Sheriff and Prince John then pull out their own copies and confirm this (much to their annoyance). Robin then takes the second shot, this time using a special "PATRIOT arrow" and hits the target. After winning the tournament, Robin is arrested. Before Robin is taken away, Marian promises to do the most disgusting thing she can think of in exchange for Robin's safety: marry the Sheriff.

Several hours later, the ceremony commences with the opening prayer in "The New Latin" (Pig Latin). The Abbot (Dick Van Patten) quickly and discreetly reveals the Sheriff's unimposing first name, Mervyn. Before Marian can say "I do", the castle is attacked by the Men in Tights, led by Little John, Ahchoo, Blinkin, and Will. They quickly free Robin and a battle ensues. However, Marian is carried off to the tower by the Sheriff, who wants to deflower her. Robin arrives and wins an intense sword fight, missing his sheath and accidentally running the sheriff through. The witch Latrine (Tracey Ullman), Prince John's full-time cook and part-time adviser, saves him by giving him a magical lifesaver in exchange for agreeing to marry her. Before Robin and Marian "celebrate" in her bedroom, Broomhilde arrives, insisting they get married first. Rabbi Tuckman conducts the ceremony, but they are suddenly interrupted by King Richard (Patrick Stewart), recently returned from the Crusades, who insists on sanctioning the marriage with a kiss to the new bride. He orders John to be taken away to the Tower of London and made part of the tour. He also announces that, due to the foul stench the prince has left over the kingdom, all the toilets are to be called "johns".

All being as it should be, Robin and Marian are married and Ahchoo is made the new sheriff of Rottingham. When the crowd expresses its disbelief at a black sheriff, Ahchoo reminds them that "it worked in Blazing Saddles". When the night comes, Maid Marian's chastity belt will not open with his key (to her fury and dismay), so Robin calls for a locksmith.

Retrieved from "https://parody.fandom.com/wiki/Robin_Hood:_Men_in_Tights?oldid=651624"
Community content is available under CC-BY-SA unless otherwise noted.