The Parody Wiki
Register
Don't have an account?
Sign In
Advertisement
in: Characters, Animals, African Animals,
and 71 more

The rock hyrax (Procavia capensis) is a small, tailless mammal which superficially may resemble a guinea pig, but is actually more closely related to elephants and manatees. Also known as the ‘dassie’, the dense fur of the rock hyrax is variable in colour, but is typically brownish-grey on the upperparts, with lighter underparts. A distinctive patch sits the back of the rock hyrax, which may be black, yellow or orange, and covers a gland that secretes a characteristic odour. The soles of the feet are moist and rubber-like, providing the hyrax with a good grip as it clambers around its steep, rocky habitat. A rather vocal species, the rock hyrax produces a series of intermittent “harsh yips” which build up to “guttural grunts” to defend its territory, and a sharp bark is used to warn others if danger threatens. 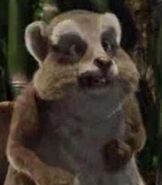 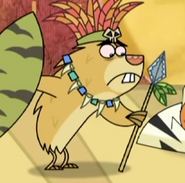