Roderick A. "Roddy" Maude-Roxby (born April 2, 1930 in London) is an English actor who has appeared in numerous films, such as Walt Disney's The Aristocats, where he appeared as Edgar Balthazar; Unconditional Love; and Clint Eastwood's White Hunter Black Heart, playing Thompson. He has also made theatrical and television appearances in, among other shows, The Goodies,Rowan and Martin's Laugh In, Not Only... But Also and The Establishment. He won the Theatre of the Year Award for Best Comic New York in 1968 for his work as a stand-up comedian.

An early innovator at the Royal College of Art, alongside David Hockney and Peter Blake, he was one of the UK's first performance artists, before it was a recognised art form. He also collaborated in a pre-Monty Python series with Michael Palin and Terry Jones, called The Complete and Utter History of Britain.

Maude-Roxby has also worked with masks and improvisation for over 40 years and was a co-creator of improvisational games developed at the Royal Court Theatre, and then as "Theatre Machine" with Keith Johnstone. 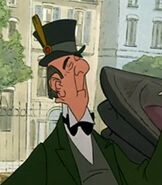 Edgar
Add a photo to this gallery
Retrieved from "https://parody.fandom.com/wiki/Roddy_Maude_Roxby?oldid=569158"
Community content is available under CC-BY-SA unless otherwise noted.