Roger was a freaky Dakotaraptor that is apart of an extended family of dakotaraptors and the herd. This family had the ability of flight, often traveling in the skies. He has a special ability of strong eyesight, but sometimes lies about how far he can see or what he can see in order to avoid conflict. Roger may be the smartest member of his family and the herd, but he is a disappointment to his dad, who expects him to be as excited as his sister about his farfetched plan to get rid of Buck and take over the Ice Age World. 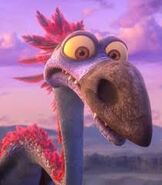 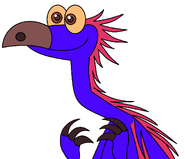 Roger Meet Knotty The Snake
Add a photo to this gallery

Role of the film

Roger and his dad and sister all made a living out of stealing other dinosaur eggs. One day in the Dinosaur World, they stole a triceratops egg from a Mother Triceratops. Buck, a crazy weasel, happened to be taking a shower near by. He jumped on Roger, plucked a feather off of him, tickled him with it for him to let go of the egg, all while singing The Marriage of Figaro (Buck Version). Gavin stole the egg but Buck got it out of his mouth, and hid in a tiny cave, with Gavin trying to get in. He slid down the other end of the cave and ended up getting out of the underground dinosaur world.

They heard the weasel find his old herd and talk to them about a Stone Tablet and that an asteroid was coming. They planned that they'd fly over the asteroid as it kills everyone on Earth. Roger pointed out it wasn't possible, but Gavin growled at him and Roger remarked it was a great plan. Roger had great eyesight, from his mother, and Gavin remarked he'd be useless without her eyes, because of her amazing eyesight and he likes to remember his wife's eyes. Roger found the herd with the weasel and they began their journey. They lost them when they entered the forest and not long later they were zapped by an electrical storm.

Gavin set up a job for Roger. He told Roger to steal the weasel. Roger went to kidnap Buck and noticed his daughter, Bronwyn and said "Lucky Pumpkin". He kidnapped Buck, all the time telling the asleep weasel that he was sorry. Gavin was overjoyed when Roger did it, only for Roger to not get the weasel and accidentally get a ground sloth called Granny. Granny mistook Gertie for an angel and climbed all over her, but, Gavin sent Roger to help his sister, only for it to turn out crazy. He sighed and ate Granny, telling his kids that's how it's done. Though Granny was still looking for a way out of Gavin's stomach. Gertie helped Gavin cough up Granny and ended up punching her when she somehow flew back up.

They later knocked a Geotopian crystal off a bridge. They pinned Buck done but Buck told them that they needed to work together to save their lives. Roger told Gavin that Buck was right, and that they should help him. They agreed to survive. They flew the crystal to a volcano, and the crystal threw the asteroid elsewhere.

At Peaches and Julian's wedding, two mammoths, Gavin, Gertie, and Roger danced when Brooke sang My Superstar and become the "non-furry" members of the herd.

Roger is a smart, caring and loving Dino-Bird.

Unlike his father and his sister, he's caring and able to see reason.

Although he stole an egg along with his father and sister, he doesn't think it's right to do that.

Roger has blue scales, dark-light underbelly and red feathers. He has light brown orange eyes and great eyesight he gets from his mother. He has a slightly scuffed black beak. Unlike the other dino-birds, Roger's body was rather skinny and lean, possibly due to him being the youngest.

Retrieved from "https://parody.fandom.com/wiki/Roger_(Ice_Age)?oldid=2464687"
Community content is available under CC-BY-SA unless otherwise noted.