Rose Lavillant is a student in Miss Bustier's class at Collège Françoise Dupont. In "Princess Fragrance", after Chloé Bourgeois taunts Rose and tears up her letter to Prince Ali, she is akumatized by Hawk Moth and becomes Princess Fragrance, a perfume-shooting supervillain.

In "Félix", after being fooled by Félix to think that Adrien didn't appreciate his friends, she is re-akumatized into Princess Fragrance, and, along with Reflekta and Lady Wifi, the three supervillains form The Punishers Trio, a group of supervillains who want to get revenge on Adrien, later Félix.

In "Gang of Secrets", after Marinette keeps hiding secrets from them, Rose is re-akumatized by Shadow Moth into Princess Fragrance along with Lady Wifi, Reflekta, Timebreaker and Horrificator, the five supervillains all form the Gang of Secrets, a group of supervillains who want to reveal Marinette's secrets.

In "Guiltrip", Rose receives the Pig Miraculous from Ladybug. When the Miraculous is inhabited by Daizzi, Rose becomes Pigella, a pig-themed superhero who helps Ladybug and Cat Noir ‘during particularly different missions’ in the fourth season and beyond. 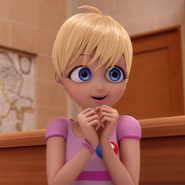 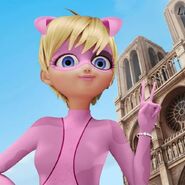 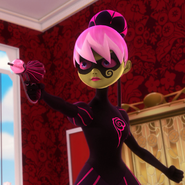 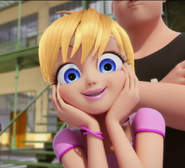 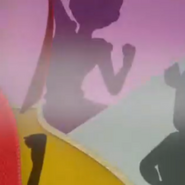 Add a photo to this gallery
Retrieved from "https://parody.fandom.com/wiki/Rose_Lavillant?oldid=2591886"
Community content is available under CC-BY-SA unless otherwise noted.