The Parody Wiki
Register
Don't have an account?
Sign In
Advertisement
in: Characters, Animals, North American Animals,
and 73 more

The roseate spoonbill (Platalea ajaja) is a striking wading bird that is easily identifiable thanks to its bright pink plumage and spoon-shaped bill. It is a large bird, with a wingspan of over a metre, but is mid-sized in comparison to other species in the order Ciconiiformes to which the roseate spoonbill belongs. It is long-legged, long-necked and has a bald head that is pale green in appearance, with a white neck, breast and back. The rest of the plumage is mostly various shades of pink, with dark reddish-pink wing and upper tail feathers. There is a yellow patch near the bend of the wing, and the tail is orange. The roseate spoonbill’s bill is about 15 to 18 centimetres long and is grey, while the legs are reddish-pink. Male and female roseate spoonbills are similar in appearance and colour, although males are slightly larger. Juvenile roseate spoonbills are mostly white, with dusky-pink wing tips which develop and darken as they mature. They have fully feathered heads and pale yellowish-pink bills. Full adult plumage is thought to develop after four moults, which takes about three years. The roseate spoonbill is a sociable bird, and is known to feed, roost and fly in formation with others of its kind. The roseate spoonbill feeds by walking slowly through the water, swinging its distinctive spoon-shaped bill from side to side. Roseate spoonbill hatchlings are fat, with salmon-pink skin covered in sparse white down. 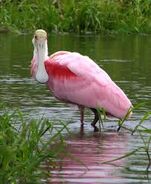 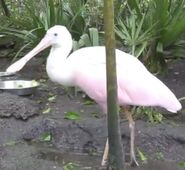 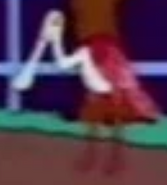 Roseste Spoonbill from the Simpsons