Start a Wiki
Commander Lyle Tiberius Rourke is the main antagonist of the 2001 movie, Atlantis: The Lost Empire. He was the Commander of a previous mission to Iceland where he assisted Milo Thatch's grandfather Thaddeus in locating the Shepherd's Journal. His goal is to not only discover the lost city, but to use its Heart to become the richest man on Earth. Rourke met his end when Milo slashed a piece of the crystal in his arm and made him turn into a crystalline monster, but when he tries to lunge at Milo he gets shredded into pieces by the balloon's propeller thus killing him forever. 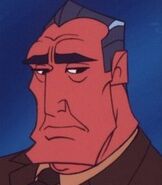 Rourke in Atlantis: The Lost Empire

Rourke's Death
Add a photo to this gallery
Retrieved from "https://parody.fandom.com/wiki/Rourke?oldid=1171922"
Community content is available under CC-BY-SA unless otherwise noted.