Rover Dangerfield is a smooth-talking bassett hound who was raised by his owner, Connie, a Las Vegas showgirl. But when her jealous boyfriend, Rocky throws him over the Hoover Dam, Rover ends up in a farm where he meets a boy named Danny and a beautiful collie named, Daisy.

Rover plays The Thief in The Dog and the Cat

Rover plays Droopy in Kovu and RJ: The Movie

Rover plays himself in The Secret of NIMH (Dogs Version)

Rover Played Alvin Seville in Rover and the Dogs (1983) 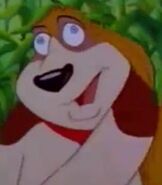 Add a photo to this gallery
Retrieved from "https://parody.fandom.com/wiki/Rover_Dangerfield?oldid=2483107"
Community content is available under CC-BY-SA unless otherwise noted.