The Parody Wiki
Register
Don't have an account?
Sign In
Advertisement
in: Max & Ruby Characters, Easter Bunnies, Characters who can fly,
and 53 more

Ruby is a character from Max & Ruby. She is a bunny who lives with her younger, four-year-old brother Max. She is 7 years old and turns 8 in the episode "Surprise Ruby".

She is a Bunny

She is a vampire hunter

She is a flying boy

She is a traveler

She is an arabian princess

She is a dragonfish

Ruby played Snow White in Ruby and the 7 Equestria Girls

Ruby played Rocko in The Pebble and the Bunny

She is a penguin

She is a superhero with the 5 powers combined

She is a bat

Ruby played Trixie in My Little Animal: Friendship is Power

She is a unicorn

Ruby is a smart and curious bunny. She is very responsible, and prefers order and logic when doing anything. She has a motherly nature, in that she watches over Max and only wants what is best for him - but at the same time, as his older sister she can come off as being bossy or overprotective. She handles Max with the best of her capabilities; but often finds herself surprised by him, or actually realizing how much he can help out. At times, Ruby can be competitive, or have her judgement momentarily distracted or clouded by certain things. She enjoys girly activities, as well as things like sports.

She currently attends "Bunny Scouts" which involves activities that uses knowledge and motion. Her goal in Bunny Scouts is to earn every merit badge to fulfill her main goals in life such as bird-watching, being a good hostess, and baking delicious things. She also shows to excel in many things; like selling items, making things, and trying new sports or tricks.

Ruby has white fur and black eyes with long gray whiskers. Originally she wore a purple blouse with a yellow dress on top of it, adorned with green and orange flowers. In later seasons she switched to a pink dress on top of a pale pink shirt with daisies on it.

Ruby has appeared in every episode of Max & Ruby. Her first appearance was in the pilot episode. 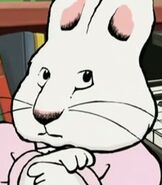