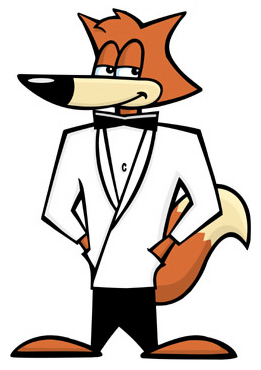 SPY Fox is a fictional spy and the main protagonist in the SPY Fox series. Originating in 1997, SPY Fox has been in a total of five games, three of which are of the Junior Adventure series. He makes cameo appearances in Freddi Fish 2: The Case of the Haunted Schoolhouse, Putt-Putt Travels Through Time, Freddi Fish 3: The Case of the Stolen Conch Shell, Putt-Putt: Pep's Birthday Surprise, Pajama Sam 2: Thunder and Lightning Aren't So Frightening, and Pajama Sam's Sock Works. He has been voiced by Bob Zenk and Mike Madeoy.

The game is an adventure game centered around the fictional island of Acidophilus in Greece. The villain in this game is William the Kid, the CEO of the Nectar of the Goats (N.O.G.) Corporation tries to eliminate cow's milk from the earth by kidnapping cows and his rival, Mr. Udderly, the president and CEO of Amalgamated Moo Juice Incorporated. Kid plans to capture the cows, frame them and eventually take over the dairy world.

The game is an adventure game centered around the World's Fair. The villain in this game is Napoleon LeRoach, the leader of the Society of Meaningless Evil, Larceny, Lying and Yelling (S.M.E.L.L.Y.) tries to disrupt the fair by using an evil Dogbot, a 1000/1 scale robot capable of destroying the fairgrounds.

The game centers around SPY Fox on a world wide mission. The villain in this game is Poodles Galore, the self-proclaimed "Queen of Cosmetics". Poodles has sent a giant aerosol satellite into orbit to destroy the planet's ozone layer, so everyone will have no choice but to purchase her latest sunscreen, making her fabulously rich and bringing her to the top of the cosmetics world.

Russian Blue steals the famous Limburger cheese from a museum. In 100 levels, SPY Fox rides various vehicles like a water bike and a motorcycle and gets around goons by throwing bananas and plungers at them. Along the way, Fox picks up oil cans to run the bike and stray pieces of cheese. On the final level, he gets the cheese back from Russian Blue.

This game is an arcade game centered nowhere in particular. The evil King Konglomerate, maker of fine mustards, is fed up with poor sales of mustard over ketchup. He plans to send his robots to capture all the tomatoes in the world and launch them into a black hole. Its up to SPY Fox to fly in his Mulitple Environment SPY Ship, (M.E.S.S.) and stop King Konglomerate's robots from stealing all the tomatoes in the world.

SPY Fox is an anthropomorphic red fox, normally seen wearing a white tuxedo, black pants, and a black bowtie. He does not wear shoes. He has a large tail with a pastel-colored tip.

In the original US version, SPY Fox is largely meant to be an imitation of Maxwell Smart, the lead character of the 1960's television comedy series Get Smart. This is visible in his high nasal voice and his occasional use of Smart's catchphrases, his voice is also similar to Inspector Gadget from the 80's television series. Like Smart, he is a bit clueless and bumbling at times, but usually he is clever, resourceful, and generally talented in his work, often becoming overconfident.

He plays Aladdin in SPY Foxladdin 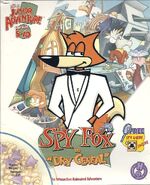 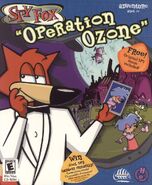