The distinctive African sacred ibis (Threskiornis aethiopicus) is characterised by its large size, primarily white plumage and conspicuous black head and neck, which lack feathers. The black-tipped wings have areas of bare red skin on the upper and lower surfaces, and there are also bare red areas on the breast and sides of the body. The long black legs and feet also lack feathers. One of the most prominent features of this bird is its long, black, downcurved bill, which has a neck sac positioned underneath its lower surface and is used for probing into soft mud and sand in pursuit of prey. The eyes of the African sacred ibis are brown or red-brown and the lower eyelid is pink. The male and female African sacred ibis are similar in appearance, although males are larger than females and frequently have a longer bill. During the breeding season the differences between the sexes become more apparent, as the shoulder area of the male develops a blue metallic sheen and the bare skin on the underside of the wings and breast is flushed vibrant red, while the black on the tips of the wings becomes more extensive. The dull black skin of the head and neck becomes shiny and the legs turn red or dark red. A red ring also develops around the iris. The juvenile African sacred ibis is very different in appearance to the adult. The head and neck are covered in a fine, black down and there is a white spot on the crown of the head. The juvenile’s legs and feet are grey-black and the tips of the wings are brown-black. The African sacred ibis does not gain its full adult plumage until it is around three years old. The African sacred ibis has three recognised subspecies: Threskiornis aethiopicus aethiopicus, Threskiornis aethiopicus bernieri and Threskiornis aethiopicus abbotti. The three subspecies differ in their distribution, as well as in their appearance, with T. a. bernieri and T. a. abbotti having a thinner bill, no neck sack and fewer blackflight feathers than the nominate subspecies. The subspecies also have different iris colouration, as T. a. abbotti has a blue iris, whereas T. a. bernieri has a pale blue or white iris. T. a. abbotti can also be distinguished by the black stripe on the underside of its wings. Both of these subspecies are smaller in size than the nominate subspecies. The vocalisations of the African sacred ibis are highly variable, with harsh croaking noises being made during flight and squeaking ‘whoot-whoot-whoot-whooeeoh’ or ‘pyuk-pyuk-peuk-peuk-pek-peuk’ calls made while individuals are on their breeding grounds. Vocalisations are also used by females to attract males and during copulation. Introduced populations of the African sacred ibis in Europe are thought to have been established after escaping from zoos. A long-living species, the African sacred ibis can live for over 20 years. An opportunistic feeder, the African sacred ibis takes a wide range of prey. 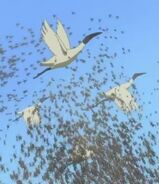 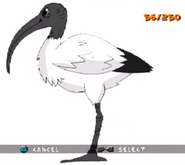 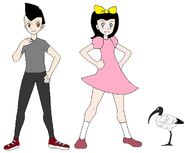 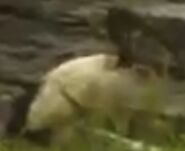