The Parody Wiki
Register
Don't have an account?
Sign In
Advertisement
in: Trains, Movies Spoof, Julian Bernardino,
and 59 more

Salty is a dockyard diesel who works at Brendam Docks.

Salty worked on an unnamed coastal railway for many years, where he acquired his vast collection of stories and songs and possibly his sailor's accent, before coming to Sodor to work at the Centre Island Quarry with Mavis, Bill, and Ben. Salty was upset, being used to working near the sea, but he soon won the trucks over with his tales and sea shanties, and as a reward for his hard work was sent to work at Brendam Docks. He, Bill and Ben were trapped at Brendam Docks one night, much to the annoyance of Cranky. He later teased Gordon about pulling trucks and being bossy.

In the seventh season, he and Fergus saved a ship from crashing into the rocks, when the lighthouse lamp went out. He and Harvey later asked Murdoch about his past, which ended up annoying him.

Salty has shared many stories with his fellow engines that have often come into play later on. He told Percy that the carpet he was delivering might be magic, and odd happenings convinced Percy and Gordon that it was.

In the ninth season, he accidentally ran over a flagpole that Henry was meant to deliver to the Scottish Castle.

He also told a story about a treasure on Sodor and Thomas followed all of Salty's clues and eventually found the treasure, just as the new Maritime Museum opened.

He later introduced Thomas to Billy, was one of the first engines to meet Stanley, looked at the docks for Thomas when he was missing, cheered at the docks when Thomas was found, and tried to take some woodsmen into the forest, but was blocked by trucks.

Salty later told the engines about the "strange engines" (Bash, Dash, and Ferdinand) that lived on Misty Island, a mysterious island not far from Sodor. He also told Thomas that the Star of Knapford could be magical.

In the sixteenth season, he told Percy about the "Monster of Brendam" and Edward tried to find him a present.

In the seventeenth season, he tried to make Kevin feel better about working with Cranky. Later, Salty started experiencing engine trouble, but refused to go to the Dieselworks, as he was worried that the Fat Controller might send him back to the quarry if he was not useful. This concern was strengthened with the arrival of Porter. Salty went to the Dieselworks, but ended up crashing into a flatbed of fuel cans in his hurry to return to the Docks. The fuel made his wheels slip, and he ended up colliding with a shipment of party decorations! Salty was now certain that he would be sent away, but, to his relief, the Fat Controller told him that he was meant to work with Porter, who had been sent to help him.

In the eighteenth season, he told the engines about the flatbeds of fear, encouraged Percy when Percy was missing Gator, along with Porter almost had a collision with Bill and Ben and also helped Timothy to play a trick on the twins.

In the nineteenth season, he pretended to be the Ghost of Christmas Past to frighten Diesel, and reminded him of his past mistakes. Salty later had to go to the Mainland as they were short of an engine, but he was afraid to go on a ship and travel by sea. However, he overcame his fears thanks to Thomas, who reminded him of his past tall tales which scared the other engines.

In "Sodor's Legend of the Lost Treasure" he told Edward, Henry, James, Cranky and Porter about a "lost pirate".

Salty is easy-going, friendly and very practical. He also enjoys telling stories revolving around the sea and fantasy. His seafaring ways and accent are sometimes ridiculed by the other engines, but his usefulness almost always helps the others overlook that. He can work with trucks like no other engine; this is due to his enjoyment of working to a musical rhythm like the trucks and it may also be due to his vast collection of sea shanties. He loves the sea so much that he pines for it when he is away from it for long periods of time.

Salty is a BR Class 07 diesel shunter. The number he has, 2991, is a real BR number belonging to a member of the class; built in 1962, this locomotive escaped the cutter's torch by becoming a static generator at Eastleigh Railway Works and is still working there under the ownership of Knights Rail Services as of March 2007.Salty's class was notorious for having their axleboxes run hot at high speed. This class of locomotive worked at Southampton docks, where they replaced the older Southern Railway USA Tanks (Rosie's class) and the LB&SCR E2 tanks (Thomas's class).

Salty is painted crimson with pink warning stripes along his body, wasp stripes on his front and rear and yellow buffer beams with signs of rust. At the top of his forehead, he has the brim of a skipper's hat.

In Salty's Surprise, it is revealed that due to a shortage of red paint, he was once painted green.

"Here comes 'Mr. Showoff'!" grouched Ben.
"You have to admit, he's got a knack with those Trucks!" said Mavis.
"Driver say's he'll bore the bolts off us with his stories!" huffed Bill.
But Salty didn't say a word. He didn't come near the shed. Mavis was worried, she rolled alongside and asked him what he was doing on his own.
"Oh I thought I might catch a bit of sea breeze."
"You really do miss the sea, don't you?" asked Mavis.
"Aye, I do."

- Salty and Porter singing, Away From The Sea, seventeenth season

"Clattering Columbus! The world is heading straight for us!" 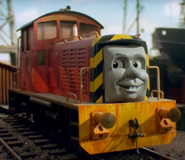 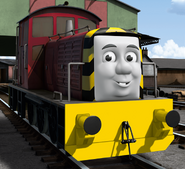