He appears in most of the '90s games and all of the 2000s games. He appears as a cub driving a ship in Reader Rabbit Math Adventures Ages 6–9, in the flashback. He also teams up with Penelope the Parrot in all activities except Monkey Pizza Party. He meets his grandpa, Grandpa Sampa, in Reader Rabbit Learn to Read with Phonics: 1st and 2nd Grade, which also shows that his residence is a treehouse and that he was born in Gunk. He also appears as the main protagonist of the live-action/animated educational reading video series Read Now! and is the mascot and leader of the club, with a shiny red nose, a red mane and a red tuft of hair on his tail.

Sam likes to go on adventures with his friends and crack jokes, and cares a lot about how he looks (especially in front of others), but sometimes cares more about Reader Rabbit and his friends.

His best friends are Reader Rabbit, Paige and Chester. 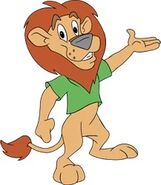 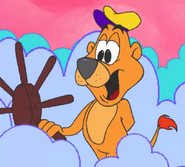 Retrieved from "https://parody.fandom.com/wiki/Sam_the_Lion?oldid=2566050"
Community content is available under CC-BY-SA unless otherwise noted.