The Parody Wiki
Register
Don't have an account?
Sign In
Advertisement
in: Characters, Animals, North American Animals,
and 40 more

The sandhill crane (Antigone canadensis) is a species of large crane of North America and extreme northeastern Siberia. The common name of this bird refers to habitat like that at the Platte River, on the edge of Nebraska's Sandhills on the American Great Plains. This is the most important stopover area for the nominotypical subspecies, the lesser sandhill crane (A. c. canadensis), with up to 450,000 of these birds migrating through annually. Adults are gray overall; during breeding, their plumage is usually much worn and stained, particularly in the migratory populations, and looks nearly ochre. The average weight of the larger males is 4.57 kg (10.1 lb), while the average weight of females is 4.02 kg (8.9 lb), with a range of 2.7 to 6.7 kg (6.0 to 14.8 lb) across the subspecies. Sandhill cranes have red foreheads, white cheeks, and long, dark, pointed bills. In flight, their long, dark legs trail behind, and their long necks keep straight. Immature birds have reddish-brown upperparts and gray underparts. 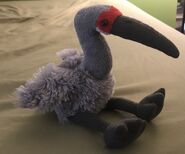