The Parody Wiki
Register
Don't have an account?
Sign In
Advertisement
in: Undertale Characters, Males, Heroes,
and 18 more

Sans is the brother of Papyrus and a major character in Undertale. After the events of said game, he and his brother moved into a trailer, where they hang out.

Sans is an big-boned skeleton who stands at 2 feet tall. He has a round skull that is strangely shaped like a bread slice. He also has a perma-grin.

He wears a light-blue hoodie with a grey hood, black boxer briefs with white lining on them, pink slippers and a white tank-top.

Sans is a lazy. flippant, pun-loving lad who loves to make Papyrus' life a living hell. He also likes to tell jokes about skeletons. But after the events of Undertale, he was given a wider aray of how to spend his life. So he developed a life-style of a sloppy, care-free, happy and enjoyable life.

Sans is very much sloppy, never cleaning his room or changing his clothes. One day, Papyrus walked into Sans bedroom and found Sans lying on his bed with 29 McDonalds boxes on his bed along with half-eaten chicken nuggets and soggy, moist burgers all over the floor and walls. Speaking of McDonalds, it is Sans' favourite place to go when he is hungry, or just wanting to play Halo with someone other than Papyrus (Who hates Halo).

Sans not only like Megamind and animated movies but he also loves to intimidate random kids, whether they did something bad to him or not. He mugs these kids for fun and make kids fear going to the playground, despite nearly every kid he mugs and steals from is like a foot taller than him.

Sans and his brother Papyrus are the poorest people in their neighborhood, with Sans mainly being the breadwinner by setting a stand, where he sells many things that ranges from hot dogs to Papyrus' toys he still loves but Sans sells behind his back. Sans will only pays for three things when it comes to essentials, power, food, and internet. He pays for gasoline for his generator, which provides power, he has internet that is very high-speed yet expensive, which he has to pay for often, and he goes to McDonalds for all three coarse dinners, breakfast, lunch and supper. He does this to avoid Papyrus' bad cooking.

Sans in Undertale: The Movie 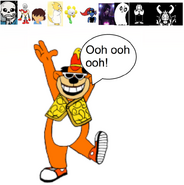 Sans playing in the mud

Sans playing in the quicksand

Sans at the swamp

The Undertale characters in a jungle