Sarah Bryant (サラ・ブライアント, Sara Buraianto) (born July 4, 1973; San Francisco, California) is a fictional character in the video game series Virtua Fighter. Pre-Virtua Fighter 4, it was stated that she used Jeet Kune Do like her brother.

Since Virtua Fighter 4, she fights with general 'Martial Arts', which includes Savate, Taekwondo and Karate style. However, it seems that her style still has some characteristics like Flamingo stances and grappling.

Sarah enters the World Fighting Tournament alongside Jacky to bring down Judgement 6, the evil syndicate that kidnapped and brainwashed her into trying to kill her own brother.

Sarah is a confident and optimistic young college student who often masks her feelings with a smile. Her favorite hobbies are skydiving and relaxing on the beach. She also enjoys fighting and is always quick to talk down on her opponents when they fail to meet her expectations. Ever since she was a young girl, Sarah admired and envied her brother's successes; so much so that she sought to surpass Jacky by beating him one-on-one, which usually ended with Jacky emerging victorious. Despite this, Sarah still cares deeply for her brother, and she will never forgive J6 for all the things they made her do to him while under the organization's control.

According to the game's story, Sarah, youngest daughter of the Bryant family becomes suspicious of the circumstances surrounding her brother Jacky's horrible accident in the 1990 Indianapolis 500. While investigating this accident, a mysterious group called Judgment 6 kidnapped and brainwashed her.

Her innate fighting sense aroused by the brainwashing, Sarah was sent into World Martial Arts Tournament to deliver the knock-out blow to her brother Jacky.

As the second tournament unfolds, Sarah is still brainwashed. However, J6 could not control her completely during the last tournament, and she failed to carry out her orders. She is further trained over the next year by the Organization to become the strongest fighting machine in the hopes that she will kill her older brother, Jacky.

Although Sarah was rescued at the tournament by Jacky, who claimed to be her brother, all of her memories had been wiped clean. Although occasional fragments of her memories began to return as she lived her daily life, she found that they returned far more often during her training. With the hope that prolonged combat will advance her memory recollection, she decided to enter the third tournament.

Since the end of the third tournament, Sarah has fully regained her memories. Life went back to normal for all the Bryants, but Sarah still felt a twinge of uncertainty. Even though she has recovered, she remembered all the bad things she had done while under the Organization's control. Worst of all, she remembers trying to kill Jacky. She is also unable to remember clearly enough if the desire to kill Jacky was a result of J6's brainwashing, or if it was part of her own wishes all along. When she finds out that Jacky intends to join the fourth tournament, she decides to do so as well, so that she can beat Jacky and resolve matters once and for all.

During the Fourth World Fighting Tournament, it was revealed that J6 had sinister motives for Sarah and she was in great danger. Vanessa offered to protect her and infiltrate the organization when suddenly, in the middle of the tournament, Vanessa disappeared. When Sarah finds out that her brother, Jacky, aims to destroy the criminal organization and has been secretly training for the Fifth World Fighting Tournament, she decides to enter in the hopes she can surpass him and bring peace to her past. Sarah doesn't realize that her efforts play neatly into J6's hands and put her in more danger than ever before.

In Virtua Fighter Kids, Sarah is depicted as six to eight years old. Like her grown-up self, she is still brainwashed, but less serious; it's implied in her ending that Dural brainwashes Sarah to get Jacky in trouble and to pick on him rather than kill him.

Sarah appeared with the entire Virtua Fighter 2 cast in the Sega Saturn game Fighters Megamix. Along with Kid Akira, Kid Sarah is an unlockable playable character.

Sarah stars as a guest playable character in Dead or Alive 5 along with Akira Yuki and Pai Chan.

Sarah is kind and gentle in the anime, she and Jacky are the children of a wealthy American family. She has a flying squirrel named Alexander for a pet and travels with Jacky in their RV. Whenever Jacky participates in any Formula One contest, Sarah helps out by doing racing queen duties. She is later kidnapped and brainwashed by Eva Durix to be used as a basis for creating a "Perfect Soldier", Dural. In the series, she first has a crush on Akira but later has feelings for Kage-Maru. Sarah was voiced by Maya Okamoto in Japanese and by Juliet Cesario in English. 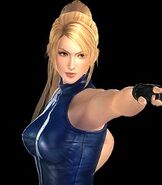 Sarah Bryant in Dead or Alive 5 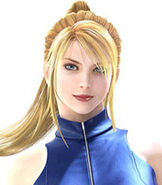