Start a Wiki
Sazora is an evil witch who lived in her own castle. In her giant scorpion monster form, to destroy Steve and his gang. But she was stabbed with a sword by Clinton used and plunged over the cliff to her death. 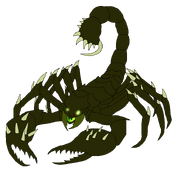 Retrieved from "https://parody.fandom.com/wiki/Sazora?oldid=1985948"
Community content is available under CC-BY-SA unless otherwise noted.