The scalloped hammerhead (Sphyrna lewini) is a species of hammerhead shark, and part of the family Sphyrnidae. Originally known as Zygaena lewini, the name of its genus was later renamed to its current name. The Greek word sphyrna translates into "hammer" in English, referring to the shape of this shark's head. The most distinguishing characteristic of this shark, as in all hammerheads, is the 'hammer' on its head. The shark's eyes and nostrils are at the tips of the extensions. This is a fairly large hammerhead, though is smaller than both the great and smooth hammerheads. 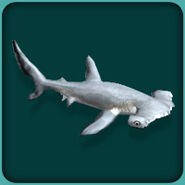