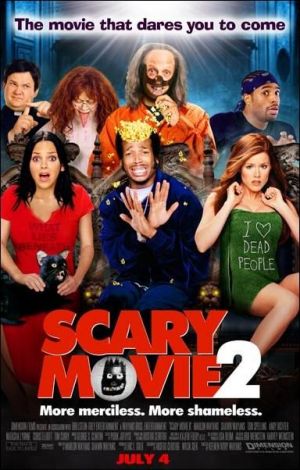 Scary Movie 2 is a 2001 American parody film and the second film of the Scary Movie franchise. Though part of the first Scary Movie '​s tagline read "...No sequel", this film's tagline compensated by adding "We lied".

The film opens with a parody of The Exorcist, during which teenager Megan Voorhees becomes possessed by the spirit of Hugh Kane, the previous owner of the House. Two priests, Father McFeely and Father Harris visit the house. After McFeely pays a trip to the toilet, they both attempt to drive Hugh's ghost out, but the exorcism does not go as planned, resulting in a chain of projectile vomiting and various instances of pedophilia. Finally, McFeely responds to an insult towards his mother by shooting Megan.

One year later, Cindy Campbell, Brenda Meeks, Ray Wilkins, and Shorty Meeks are at college, trying to live new lives following the events of the previous film (although most of them actually died in the first film, Brenda claims in a deleted scene that her death was a near-death experience). Cindy and Brenda get tagged by a socially maladjusted girl, Alex. Ray, still confused about his sexuality, has two new male friends, Tommy and Buddy.

A charming yet lecherous teacher, Professor Oldman and his paraplegic assistant, Dwight Hartman, plan to study the paranormal activity at a local haunted mansion called Hell House (the same house involved in the opening scene) using the clueless teens. Meanwhile, Buddy's advances are spurned by Cindy, who is recovering from her previous relationship. When Cindy is the first to arrive at Hell House, she encounters a vulgar parrot, and the caretaker, Hanson, who has a badly malformed hand. Later that evening, the group, including sexy newcomer Theo, sit down for dinner. Unfortunately, everybody loses their appetite due to Hanson's repulsive antics.

In the night, Cindy hears voices directing her to a secret room, where she and Buddy discover a treasure chest containing the diary of the wife of the house's dead owner, Hugh Kane. They also find an old portrait of the wife and note Cindy's resemblance to her. Meanwhile, many of the teens fall victim to violent attacks. The ghost of Hugh Kane has sex with Alex in her bedroom, yet departs in the morning when Alex expresses her interest in becoming the new Mrs. Kane. Cindy gets involved in a fistfight with the house cat, Mr. Kittles. A toy clown attempts to kill Ray—but thanks to some quick thinking, Ray perversely turns the tables and rapes the clown. A weed-monster turns Shorty into a joint and tries to smoke him—fortunately, the plant gets distracted by munchies and lets him escape.

Oldman is seduced and killed by the disfigured ghost of the murdered mistress. Shorty later encounters the same ghost, yet he seduces her instead. After Dwight equips the teens with weapons that can injure their spectral enemy, they are pursued throughout the mansion. Buddy and Cindy get locked in the refrigerator. Thinking that Buddy is dying from an encounter with the ghost, Cindy gives him a handjob. The couple then escape the room following a convoluted deus ex machina, in which Cindy uses a collection of random objects in the room to somehow produce a Caterpillar tractor, which she drives through the wall.

Hanson himself gets possessed by Kane. Cindy, Brenda, and Theo team up to fight him, but wind up defeated when they are in their bra and underwear. Eventually, Dwight and the teens regroup, and agree to use Cindy as bait to lure Kane into a device that will destroy him. Just as they activate the device, they realize Cindy is still standing on it. Ray springs to action and saves her. The plan succeeds, freeing the group from the house's curse.

Two months later, Cindy and Buddy are in a relationship and go out for a walk. However, Buddy disappears without notice when Cindy discovers Hanson at the hot dog stand. As Cindy backs away in fear, Hanson pursues her, and, in the midst of screaming, gets struck by a red car driven by Shorty similar to the scene in the first film.

Retrieved from "https://parody.fandom.com/wiki/Scary_Movie_2?oldid=651602"
Community content is available under CC-BY-SA unless otherwise noted.