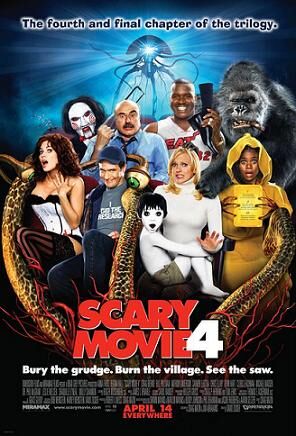 Scary Movie 4 is a 2006 horror comedy parody film and the fourth film of the Scary Movie franchise, as well as the first film in the franchise to be released under The Weinstein Company banner since the purchase of Dimension Films. It was directed by David Zucker, written by Jim Abrahams, Craig Mazin and Pat Proft, and produced by Robert K. Weiss and Craig Mazin. The film marks the final Scary Movie appearances of the main stars, Anna Faris and Regina Hall (who portray Cindy and Brenda, respectively), and concludes the original story arc. This was initially intended to be the final film in the Scary Movie franchise, but Scary Movie 5 was announced by The Weinstein Company on December 20, 2009.

Shaquille O'Neal and Dr. Phil awaken to find themselves chained to pipes in a spoof of the first Saw movie. Their host, Billy the Puppet, reveals the room is filling with nerve gas. Phil realizes they have to cut through their own ankles, but accidentally saws off the wrong foot, inadvertently leaving both men to die.

In New York, Cindy Campbell visits her former brother-in-law Tom Logan. Her husband George has died and her nephew Cody is at military school, leaving her lonely. Tom, sick of listening to her, tries to commit suicide by overdosing on sleeping pills. However, he mistakenly ingests Viagra, resulting in a painful death when he tumbles over the balustrade and lands on his absurdly erect penis. Cindy takes a job caring for an old lady, Mrs. Norris, who lives in a haunted house. Cindy's new neighbour, Tom Ryan, runs into George's old friends, Mahalik and CJ, who unintentionally reveal they had a homosexual one-night stand since a Brokeback Mountain-like trip to the mountains. Tom returns home, where his ex-wife Marilyn has arrived with his children, Robbie and Rachel, both of whom resent their father.

The next morning, Cindy confides in Tom the tragic death of her husband George during the her Million Dollar Baby-like last match of her boxing career. As Cindy and Tom realize their love for each other and kiss, the sky suddenly experiences a freak storm, leaving all motorized vehicles in the world without power; even bikes, skateboards and bombs won't move or work. Meanwhile, in a War of the Worlds reference, a gigantic object called triPod emerges from the ground to play "Karma Chameleon" before switching to "Destroy Humanity" and vaporizing people. Cindy runs back home and encounters the house’s resident ghost, Toshio.

The Japanese boy reveals that the answer to the invasion lies in his father’s heart. Tom leaves Cindy and flees with his children to an undisclosed location. While visiting Edna R. Penhall Elementary School, U.S. President Baxter Harris receives news of the alien attack. Unfortunately, Harris is more interested by the reading of "My Pet Duck", and fails to respond appropriately. The situation only worsens when his aide explains that the duck dies, and the aide explains that the aliens are vaporizing people, which leads for the president to exclaim that all of these children's parents could be dead, which culminates in a violent riot by the children. On his way out the president asks his aide to remind him to sign the abortion bill.

Cindy reunites with her old friend Brenda Meeks, now a local reporter despite having died in the previous film. Meanwhile, Mahalik and CJ are working as sewer inspectors, but when they get out of the sewer a horde of zombie-like people start to attack them. They easily fight back although one of them is Mahalik's grandma. He keeps telling her how much he loves her while beating her up at the same time, finally throwing her into the sewers at the end (a loose parody of Shaun of the Dead). Cindy and Brenda manage to find the last working car and follow the directions left by Toshio. Soon, they discover a mysterious village which resembles a pseudo-Amish community. Unfortunately, they are captured and taken into a court to have their fate decided by village leader Henry Hale (Bill Pullman). During the trial, Hale's blind daughter, Holly, stumbles into the courtroom thinking she's alone. She strips and has a large bowel movement in front of everyone. To the consternation of the crowded courtroom, Hale rules that Cindy and Brenda may stay in the village, but never leave.

Later, at an emergency session of the United Nations (UN), U.S. President Harris follows a round of offensive jokes with the unveiling of a weapon designed to combat the aliens. Scientists have modified the heat ray captured from one of the triPods into having the opposite effect of destroying bodies, leaving only clothes behind. The UN gets an unexpected and quite unwelcome demonstration when Harris unwittingly causes the ray to render everybody stark naked, beginning with himself. In a nearby field strewn with red weed, Tom and his children still are driving the car while most people try to steal it, which succeeds after a man points a gun to his head and they switch the wrong items. Later they run into a battle between the U.S. military and the triPods. Robbie decides to join the fight, excited by the graphic violence. While Tom tries to dissuade him, Michael Jackson tries to persuade Rachel to come along – but Tom manages to stop her in time, leaving the singer to be repeatedly disintegrated until only his plastic nose remains.

Tom and Rachel flee into a house guarded by the lunatic Oliver, but their respite is short-lived when father and daughter are captured by a triPod. Back in the village, Henry gets stabbed by the mentally challenged village idiot Ezekiel. A dying Henry explains to Cindy and Brenda that he is the father of Toshio, who was killed during the mass accident at Cindy’s boxing match. However, various events conspire against Henry revealing the full story, finally culminating in Cindy and Brenda being caught by the Command triPod. The main characters wake up in the same bathroom from the opening. Cindy and Brenda find themselves wearing "Venus Fly Traps" and Tom wearing an absurd device designed to shoot a pole up his behind. Then Billy appears on the TV and tells them Cindy has 60 seconds to retrieve the key.

After much prompting, Cindy realises that she has to retrieve the key from behind her eye – which she does without trouble, since the key was behind a glass eye she got following a “bad bar fight in '96”. Then both Rachel and Robbie come down from the ceiling, to be sliced into pieces unless Tom holds onto their rope, leaving him open to another, ultimately lethal torture device where his kids would be saved but he would suffer a terrible death. Moments before his imminent death, Cindy notices the toilet that has a heart drawn on it and discovers pictures of Billy with Henry's wife and Toshio. Realising that Billy was the boy's biological father and the entire invasion is revenge for his son’s death, Cindy pleads him to call off the invasion.

Brenda enters a secret room behind a trap door and appears on the TV with Billy, who takes unkindly to Brenda's appearance. Brenda starts attacking Billy, but Billy calls in his brother Zoltar for help. Brenda tackles Zoltar off the screen. Cindy appears to be very confused. After seeing how far Tom would go to save his children's lives at the cost of his own, Billy spares their lives and grudgingly apologizes for killing millions of people and allows them to depart from the bathroom. Before Cindy, Tom, Robbie, and Rachel leave, Cindy asks where Brenda is and Brenda and Zoltar appear to which Brenda reveals she had an affair with Zoltar.

In an epilogue set nine months later, Brenda gives birth to the child of Zoltar, CJ and Mahalik resume their relationship, and President Harris is seen sleeping with a duck. James Earl Jones narrates mankind's victory through love, before being run over by a passing bus. Meanwhile, Tom appears on The Oprah Winfrey Show, crazy for attention. Ultimately, following various increasingly destructive antics that include flipping, swinging, manically throwing Cindy off the stage with crazy love, breaking Oprah Winfrey's hands, knocking her with a chair, Tom rushes towards the screen as the screen goes black.

Retrieved from "https://parody.fandom.com/wiki/Scary_Movie_4?oldid=651604"
Community content is available under CC-BY-SA unless otherwise noted.