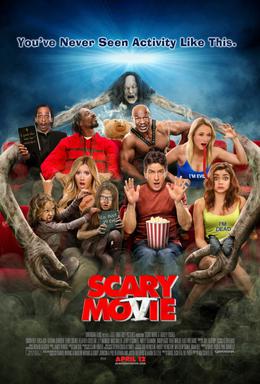 Scary Movie 5 (stylized as SCARY MOVIE) is a 2013 American comedy film and the fifth installment of the Scary Movie franchise. It was distributed by Dimension Films, a division of The Weinstein Company. The film is directed by Malcolm D. Lee and written by David Zucker. It was released on April 12, 2013.

Charlie Sheen and Lindsay Lohan get together to make a sex tape with over 20 cameras beside Sheen's bed. The time-lapsed tape fast forwards through the two doing all sorts of bedroom antics, including gymnastics, riding a horse, and having clowns jump in under the sheets. Sheen is pulled into the air by a paranormal force and thrown against walls, shelves, and doors until he lands on the bed again. Lohan is frightened so she decides to go home when she flies into the air as well; she becomes possessed and throws him into the camera and kills him. The text explains that Sheen's body was found that day but he didn't stop partying until days later, and that his three kids were found missing, Lohan was arrested, again, and a reward was put out for the missing children.

Several months later, Ja'Marcus and D'Andre are walking in the Humboldt County woods in California in search of cannabis plants to steal. After stealing one and fleeing, they take shelter in a cabin in the woods. Upon entering they see three strange creatures, later confirmed to be Sheen's children, and turn them in for the reward. The feral children are placed in isolation at a child development research center for a few months until they are deemed well enough to be returned to familial custody. When Sheen's brother, Dan Sanders and his wife Jody come to collect them, they are told they can have them if they agree to stay in a large suburban middle-class home fitted with security cameras. Jody is reluctant to take the kids at first but soon adjusts to having them. In an attempt to bond with their new children, Jody auditions for a ballet performance, Swan Lake, and is cast in the lead role as the Swan Queen.

Meanwhile, a continuing pattern of bizarre paranormal activity in their new home makes them investigate further. They eventually learn from the children that the attacks on their home are by "Mama", the mother of the children, who is under a curse and is trying to get them back so she can sacrifice both herself and the children. Maria, the couple's Hispanic live-in maid, is frightened and keeps experimenting with various rituals, Catholic and otherwise, to ward off the evil spirits in the house. During the day, Dan is frustrated with the modest progress of his test subjects at a primate intelligence research facility; ironically, Dan is not bright enough to realize that one of the chimpanzees, Caesar, is now actually much smarter than he is.

Jody and Dan, with the help of Jody's close friend Kendra, must quickly find a way to lift the curse and save their family. Along the way, they seek the assistance of psychic Blaine Fulda, who turns out to be a complete fraud, and a dream extractor named Dom Kolb, who helps them understand that the solution to their problems lies in the mysterious Book of the Dead. However, Jody and Kendra fail to see what the book is capable of, oblivious to five friends continuously becoming possessed and reviving in the cabin. They wreak havoc when either of the two read the two passages of the book; one that unleashes demons, "gort klaatu barada nikto", and the other that revives them from possession. When "Mama" takes the children to a cliff to sacrifice them, Jody fails to lift the curse with the book, but does manage to knock the evil spirit into Ja'Marcus and D'Andre's pool containing a live shark, which then devours her.

Realizing the love for her adopted children is all she needs in life, Jody gives the part of the Swan Queen to Kendra, who performs the dance in the style to that of a stripper. The performance is heavily applauded by an audience that includes Jody, Dan, the children, and Madea. The story's narrator is revealed to be Caesar, who then informs the audience that the humans should enjoy as much time they had on earth and says that apes will one day take over the world.

In a post-credits scene, Sheen wakes up, with Dom Kolb sitting beside him, from a dream extraction, i.e. the whole movie was a dream. After Kolb informs that Sheen will be sleeping with Lohan, a car crashes into the room, killing Sheen. Revealing Lohan as the driver, she gets out of the car, says to Kolb "You were driving" and throws him the keys, blaming the accident on him.

Retrieved from "https://parody.fandom.com/wiki/Scary_Movie_5?oldid=651598"
Community content is available under CC-BY-SA unless otherwise noted.