The Parody Wiki
Register
Don't have an account?
Sign In
Advertisement
in: Characters, Animals, European Animals,
and 35 more

The Scottish Terrier, popularly called the Scottie, is a breed of dog. Initially one of the highland breeds of terrier that were grouped under the name of Skye Terrier, it is one of five breeds of terrier that originated in Scotland, the other four being the modern Skye, Cairn, Dandie Dinmont, and West Highland White Terrier. They are an independent and rugged breed with a wiry outer coat and a soft dense undercoat. The First Earl of Dumbarton nicknamed the breed "the diehard". The modern breed is said to be able to trace its lineage back to a single female, named Splinter II. 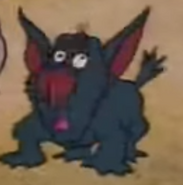 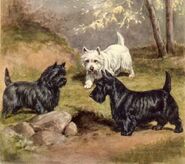