The Parody Wiki
Register
Don't have an account?
Sign In
Advertisement
in: Characters, Villains, Nintendo Villains,
and 24 more

Serpci is an orange-skined ghost who wears ancient clothing. She is styled after Egyptian royalty. Obviously, she is a queen or a pharaoh. She has white eyes and a black crown with a cobra motif.

When Luigi returns to the Sandy Grand Hall after releasing Serpci, she blows a kiss from behind Luigi which also sprays sand onto Luigi's body. She then creates a tornado which buries herself inside and rises up as a giant head of herself. She now attacks Luigi by letting four send cobras sprout from her giant head, two of them will leap at Luigi. If they misses and hit the ground, they will get dizzy and can't move. Luigi can suck up the two cobras now. After a few times, Serpci will appear on the ground with six cobras and launch them, blow them to avoid her attack. This gives Luigi a chance to flash and suck her up. Serpci also attacks by burrowing herself into the sand and leap out to crush Luigi under the sand, Luigi has to avoid the shockwave by a Burst. She sometimes forms and raises a fist to aim at Luigi which Luigi also has to destroy it with a Burst. You will get the eleventh floor's elevator button after sucking her up. 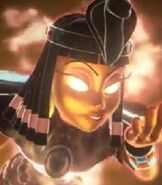