Shermy is one of the original characters from Peanuts.

He's maybe a minor character, but he is a close and a good friend to all of the children in Peanuts strips, series, and also the movie. He is also a good dancer (in a stranger way, since he does know how to do the "mean zombie dance").

Aside from Peanuts and Peanuts Movie, Shermy also appeared in several fields: 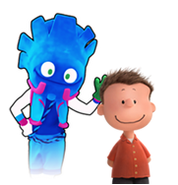 An In-Game Preview (Parody only) from Just Dance 2018 Cartoon and Anime edition, with the original Blue (Da Ba Dee) Coach.
Add a photo to this gallery

An in-game parody menu of the song Finesse by "Bruno Mars ft. Cardi B", on Just Dance 2019 alongside Pig-pen, Patty, and Frieda.
Add a photo to this gallery

He's also the production assistant and the mic holder for Sally Brown's news crew. He is also became an assistant-for-a-day for the self-proclaimed "Queen of Rap", Nicki Minaj. He's also talented when it comes to phantomiming (as it was seen in the movie).

He later on became part and involved of "Rotten Seeds Production" team and he himself became a scriptwriter for the Reali-novel series The Big One, where he also shortly appeared on the said series as a guest character.

As a Pokémon Trainer (Side show)

Unbestknown to anyone, Shermy also got his very own Pokémon, however no one knows when did he catch it. 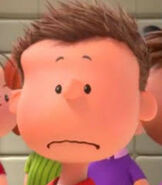 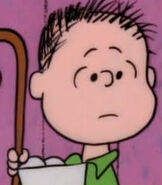 Add a photo to this gallery
Retrieved from "https://parody.fandom.com/wiki/Shermy_(Peanuts)?oldid=2331661"
Community content is available under CC-BY-SA unless otherwise noted.