The Parody Wiki
Register
Don't have an account?
Sign In
Advertisement
in: Pages with broken file links, Disney, Aliens,
and 17 more

Shoe, A.K.A. Experiment 113, is an illegal genetic experiment created by Jumba Jookiba and a character in the Lilo & Stitch franchise. He is designed to generate negative events; however, adjusting his cranial horseshoe controls the type of event (luck) generated. In a downward position, he causes bad luck; in an upright position, he causes good luck. His one true place is at the most difficult mini-golf course, making miniature golfers score holes-in-one.

Outside of Lilo and Stitch series, his current 'ohana, and his new friends are Panda "PanPan" Bear (from We Bare Bears) and his Pokémon partner, Panpan Jr. (a Pancham, from Pokémon). Their first encounter wasn't good though as Panpan thinking himself that something's wrong with him when he experienced many bad luck upon arrival in the area. Little did he know that he was already been following up by Shoe wherever he and Panpan Jr. goes as he was curious to them at first. After Shoe saved them in a peril, he officially befriended them and promised they will meet him once again when they came back. It was later given by Dr. Jumba upon his visit to bears cave and officially became another partner aside from Panpan Jr. He is currently under Panpan and Panpan Jr.'s care, and acted as one of their playmate and roommate. He also stayed with his other cousins (Stitch, under Grizzly Bear and his Pokémon partner "Grizz Jr." (Teddiursa), and Houdini, under Ice Bear and his Pokémon partner "Ice Jr." (Cubchoo)) inside their cave. 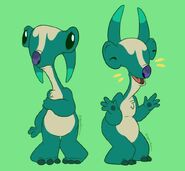