The Parody Wiki
Register
Don't have an account?
Sign In
Advertisement
in: Characters, Animals, Asian Animals,
and 43 more

The largest of the gibbons, sometimes referred to as the ‘lesser apes’, the siamang (Symphalangus syndactylus) is known for its graceful movement through the trees and impressive emotive calls. The siamang, which often reaches double the size of other gibbon species , has shaggy black fur, apart from a grey area around the chin and mouth. Infant siamangs lack any grey areas and are entirely black. Male and female siamangs are similar in appearance. However, there is a slight difference between those occurring in Malaysia and Sumatra, with the Sumatran siamang being slightly larger than the Malaysian siamang. Like all gibbons, the siamang swings through the forest using its long arms, which are considerably longer than its legs, in a mode of locomotion known as ‘brachiation’. Despite lacking a tail, the siamang’s sense of balance is impressive, and it can even be found walking on its hind legs along branches high above the ground, as well as sometimes climbing on all fours. The scientific name of the siamang, Symphalangus, comes from the Greek words ‘sym’, meaning ‘together’, and ‘phalanx’, meaning ‘finger’, and refers to the fusion of the second and third toes, which are joined by skin. These ‘webbed’ digits distinguish the siamang from most other species of gibbon, as does its longer and less dense fur, and the presence of a throat sac on both the male and female. The large naked throat sac of the siamang functions as a resonance body for its penetratingly loud, deep, expressive chorus. 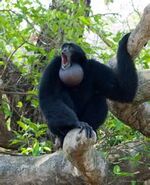 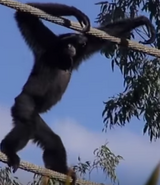 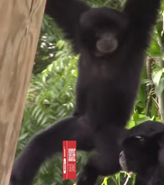 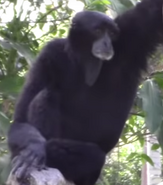 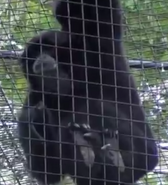