The Parody Wiki
Register
Don't have an account?
Sign In
Advertisement
in: Characters, Animals, Asian Animals,
and 23 more

As the name suggests, musk deer (Moschus moschiferus) are responsible for the production of musk, a strong-smelling substance that is one of the most expensive animal products in the world. Unlike true deer of the family Cervidae, the male Siberian musk deer does not possess antlers, but instead has two prominent, tusk-like canine teeth, which protrude below the lower jaw. These grow throughout the deer’s life and may reach up to 10 centimetres in length. The Siberian musk deer has a stocky body, with relatively short, thin front legs and longer, more powerful hind legs. The structure of the legs, the curved spine and large rear, mean that, rather than running, this species moves with a bounding gait. The fur of the Siberian musk deer is long and dense, coloured dark brown on the body, and mostly grey on the head, with some brown areas at the crown and around the long, hare-like ears. The hooves are long, wide and pointed, with the extra surface area helping to keep the deer from sinking into soft ground and snow. 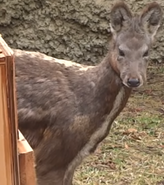