Sir Handel, named after the Skarloey Railway's first owner, Sir Handel Brown I - but previously known as Falcon, after the works where he was built - is a blue narrow gauge tank engine.

Bio in the Railway Series

Falcon was built at Falcon Works in Loughborough, England for the Mid Sodor Railway as an 0-4-0ST, causing him to bounce until he was rebuilt with a rear pony truck at Loughborough in 1910.

When the Mid Sodor Railway closed in 1947, he and Stuart were sold to the Sodor Aluminium Company at Peel Godred for an expansion project. They worked there until 1951, at which time both engines were sheeted at the projects close for almost a year. They were then purchased for a total of fifty pounds by the Skarloey Railway in 1952 and renamed Sir Handel and Peter Sam respectively.

Sir Handel was not very well-behaved when he first came to the Skarloey Railway, as shown when he insulted the coaches by calling them "cattle trucks", which resulted in them holding him back on a hill and bumping him off the rails when he had to stop for some sheep that strayed on the line and derailing himself on purpose when his driver planned for him to fetch trucks from the quarry. This behaviour had led the Thin Controller to discipline him by leaving him in the shed until he was ready to behave. He also pretended to be ill to avoid going to the quarry, as advised by Gordon, which only led to Peter Sam to have an accident with trucks at the incline after they mistook him for Sir Handel and to avoid getting televised by the BBC producers.

Sir Handel did not cope well with the worn track on the railway and would often derail - sometimes deliberately, so he was given a pair of special wheels with broad tyres to cure this problem, dubbed "steamroller wheels" by the other engines. Skarloey later had Sir Handel meet his matches with a bad-tempered steamroller named George to teach him some sense, which resulted in him having an accident when George rammed his front roller into his train. Despite this, Sir Handel still took belief that he sent George packing, but after some children heard about his situation with George and teased him about it, he never mentions steamrollers now.

In 1982, Sir Handel visited the Talyllyn Railway to help while Talyllyn was being mended. Sir Handel had plenty of adventures there, like pulling a wedding train and having to wear an eye-patch after colliding with a tree at Nant Gwernol.

When Peter Sam was brought back from the Talyllyn Railway early during a visit in 1995, Sir Handel became jealous and as a protest, deliberately knocked out his firebars. He was sent to the shed and began to fear that he would never come out after weeks went by and no one came to see him. When the Thin Controller came in one day Sir Handel confessed and asked for a second chance. Sir Handel got his firebars later that day - no one bothered to tell him that they had only just arrived.

Bio in the television series

Falcon and Stuart lived with Duke until their line was closed and they were bought by the Skarloey Railway and were renamed Sir Handel and Peter Sam respectively.

Upon arriving, Sir Handel had many adventures. He was derailed by his own coaches when he stopped too quickly in front of some sheep. Sir Handel was also very pompous and refused to do his job well when he arrived on the Skarloey Railway, so he was sent to the sheds for a while to repent. After coming back out, he got into a fight with George the steamroller, which ended in a race with George smashing Sir Handel's trucks. Once George had left, Sir Handel became even more conceited then ever and believed that he had made George go away.

Sir Handel did not reappear until years later, apparently because he was working in the stone quarry. When he returned, he had a much different attitude. He did his jobs without complaining and had trouble getting up hills. He is also wiser in most situations, but in some cases he is still pompous. He is generally of the opinion that he knows best and should be in charge. This can sometimes lead him into trouble with the other engines and the trucks. However, he always gets the job done. According to Mr. Perkins, Sir Handel can be cheeky sometimes.

He currently works on the Skarloey Railway and at the Blue Mountain Quarry, with Skarloey, Rheneas, Peter Sam, Rusty, Duncan and Luke.

Sir Handel, named Falcon and under the supervision of Duke in his younger days, has been prone to moody tantrums, acting stubborn and thinking that he knows better than others. When he was given broad wheels which hold well to the rails and has been said to give a smooth ride, this contributed to his arrogant self-importance and his belief that he is a grand engine. He has been known in the past to take a disliking to the narrow gauge coaches (often referring to them as "cattle trucks"), feigning illness, derailing himself on purpose, believing that he should be in charge and has a tendency to get too big for his wheels. Despite all this, Sir Handel works to get things done and is proud to be a reliable, helpful and good-hearted engine.

Sir Handel can be quite impressionable when it comes to engines who he views as important, express engines, or "the best engines in the world", such as Gordon, Duke or Skarloey. However, when the advice he is given results in him getting into trouble, as shown from Gordon, he can have second thoughts and want to give them a piece of his mind.

However, when he returned in the tenth season of the television series, Sir Handel had been portrayed as a steady, thoughtful and more mature engine who is ready to offer advice. He is ready to be put in charge and keep other engines in order, but ironically regained his original personality whenever this chance occurred. Like anyone else, Sir Handel enjoys being helpful and reliable.

Sir Handel is based on the Talyllyn Railway's Sir Haydn, a Hughes Falcon 0-4-2ST. Albert and Proteus share the same basis.

In The Thomas Way DVD, the Mr. Perkins segment features a re-illustrated version of Trucks! In this, Sir Handel is painted dark blue, like in the television series.

He is likely to appear in the twentieth season.

He also made cameos in one fifth season and two sixth season songs.

He is one of the Globox kids and Globox and Uglette's son.

He plays one of the llamas in Raymanladdin (ThomasTenCents34526's Style)

The new engines looked very smart. One was called Sir Handel and the other Peter Sam.
"What a small shed!" grumbled Sir Handel. "This won't do at all! We're much too smart for this old shack!"
"I think its nice", said Peter Sam.
"Humpf!" grunted Sir Handel. ''What's that rubbish?"
"Shh!" said Peter Sam. "That's Skarloey the famous old engine. I'm sorry, Skarloey", he whispered. "Sir Handel's upset now, but he's quite nice really".
Skarloey felt sorry for Peter Sam.

Peter Sam told them about the television as well. And they were pleased and excited too, all except Sir Handel.
"I don't hold with it!" he grumbled. "Vulgar, I call it. Fancy traipsing about making an exhibition of yourselves. I won't do it, I tell you! Telly something indeed. Just let the Thin Controller come here, I'll tell him something!"
Skarloey said nothing, he just winked at Peter Sam. But next day, when the Thin Controller did come to explain about the television, Sir Handel kept strangely quiet.
"Now", said the Thin Controller at last. "I want every engine to take part".
"I..I..I don't feel well", quavered Sir Handel.
"You poor engine", said the Thin Controller gravely. "You can stay in the shed".
Sir Handel smiled broadly.
"And your driver and firemen can take you to pieces. That would make a very interesting picture. Just what we need!"
Sir Handel's feelings were beyond words.

Next day, the workmen put up a fence between road and railway and went away taking George with them. This was because they had finished their work, but Sir Handel thought he had made George go away. He was more conceited than ever and talked ever lastingly about steamrollers.
"Oh dear!" whispered Skarloey one evening. "He's worse than ever, I'm sorry my plan was no good".
"Never mind", said Rusty. "We'll think of something else!"
But they had no need to do that, for some boys came and asked Mr. Hugh if they could look at the engines. Almost at once, one called out...
"...Look! Here's Sir Handel. He raced a steamroller last week, but the roller nearly beat him too! It was most exciting!"
Sir Handel never mentions Steamrollers now! 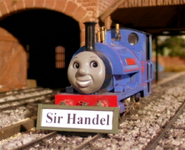 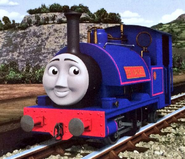 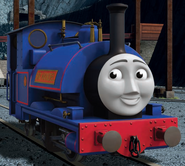