Sister Bear is one of the main characters of the Berenstain Bears series. She is Papa Bear and Mama Bear's cute and very beautiful second child and Brother Bear's younger sister (by two years); and as of The Berenstain Bears and Baby Makes Five, she is a middle child. Sister Bear is 4-6 years old. Although, in the 2003 series "The Berenstain Bears", her teacher at school has said that she is only 8. She's voiced by Taija Isen of Atomic Betty fame. She's Sylvester's Girlfriend 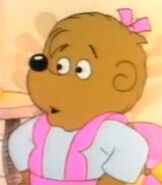 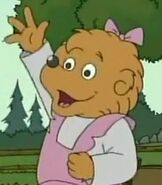 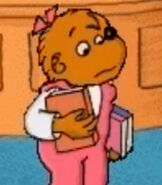 Sister Bear in her swimsuit

Sister Bear as an Adult

Sister Bear's Butt
Add a photo to this gallery

Sister as the Hippopotamus

Sister as the Hippopotamus Sitting 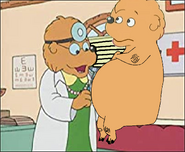 Hippo Sister Gets Checked Up

Hippo Sister Gets Tickled
Add a photo to this gallery
Retrieved from "https://parody.fandom.com/wiki/Sister_Bear?oldid=2166353"
Community content is available under CC-BY-SA unless otherwise noted.