The Parody Wiki
Register
Don't have an account?
Sign In
Advertisement
in: Characters, Animals, African Animals,
and 27 more

This medium sized antelope (Tragelaphus spekii) is highly specialised for a semi-aquatic lifestyle, spending the greater part of its life in papyrus swamps of Africa. The most obvious physical adaptation to their marshy environment is their long, splayed hooves, which enable the animal to stand and walk on mud and floating islands of vegetation without sinking. This unusual animal has a slim face, slender neck and legs, and hindquarters that are higher than the forequarters, giving the sitatunga its peculiar hunched appearance. The shaggy, water-resistant coat varies in colour among populations, but is generally greyish-brown in males and rufous-brown in females and juveniles. Both sexes have distinctive white markings on the cheeks, thighs, throat, and between the eyes, in addition to a pattern of white spots and about six to eight vertical white stripes on the body. Males are considerably larger than females, and only males have long, spiralled horns, which reach up to 45 to 90 centimetres in length. As they mature, males also develop a scraggy mane and a white stripe running down the centre of their back. 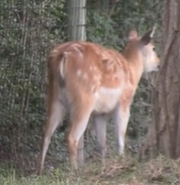