The Parody Wiki
Register
Don't have an account?
Sign In
Advertisement
in: Martha Speaks Characters, Main Characters, Characters,
and 52 more

Skits Lorraine is the other canine member of the Lorraine family. He's a goofy, large dog, a friend Martha and the adopted younger brother and sidekick of Martha. Eager and active, Skits looks up to Martha and always wants to help her out.

He used to be rather naughty, chewing on things, wetting the rug and jumping on people, but Helen has since trained him.

He can also do tricks, including, rolling over, licking online (with the command "gimme a issy", and Helen's favourite), lying down and fetching flying objects, which he greatly enjoys.

Like Martha, he also ate alphabet soup, but somehow it didn't make him talk, like Martha already does. But even upon eating alphabet soup watch TV And eats cakes.

He is about twice Martha's size, and brown, with shaggy fur, Red Nose, Pink Cheeks, Blue Eyes, and wears a green collar.

He was given to the Lorraines as a puppy by T.D. to cheer Helen up and also because T.D.'s dad found him, but is allergic to dogs. the first time in the world. 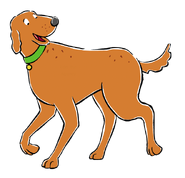