Skunk is a Character in "Skunk Fu!"

He and his friends once fought against the Weremole, Katz, the Queen of the Black Puddle, Cajun Fox, Clutching Foot, and Le Quack, who were all sent by Dragon. They overpowered the six villains and managed to defeat them. With a snap of his fingers, Skunk disintegrated them into piles of ashes.

Skunk plays Handsome Boy in The Little Mer-Sally 2: Return to the Sea

He is a handsome boy.

He is a penguin.

He is a robot.

Skunk plays Roo in The Many Adventures of Tails the Fox

Skunk plays Toto in The Wizard of OZ (Michaelsar12 Style)

He is a yellow and blue striped fish

Skunk plays Toothless in How to Train Your Animal Boy

He is the night fury

He is blue furry alien

He is the Ewok

Skunk plays Max Goof in A Winnie the Pooh Movie

Skunk plays Ranger in The Kids of The Farthing Wood

He is a blue fox.

He is a grumpy squid.

Skunk Plays Hiccup in How to Train Your Pony

He is a Viking

He is a young Jedi.

He is a rebellious leader.

He is a man made from bricks.

Skunk plays Peep in Skunk and the Big Wild World

He is a baby chicken.

He is a grumpy parrot.

He is a rabbit.

Skunk plays Quasimodo in The Skunk of Notre Dame

He is a hunchback.

He is a Peter Pan.

He is a captain.

He is a Prince Form into a Beast

He is a monk of the Air Nomads' Southern Air Temple.

He is a mountaineer.

He is the symbol of strength and courage.

He is a garden gnome.

He is a robot.

He is a monkey.

He is a lost boy.

Skunk plays Dopey in Twilight Sparkle and The Seven Toons

Like his girlfriend, Snivy, he is one of the main characters. 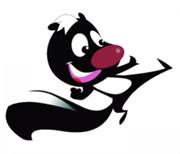 Skunk as a sumo

Skunk as a blueberry

Skunk's god form
Add a photo to this gallery
Retrieved from "https://parody.fandom.com/wiki/Skunk_(Skunk_Fu)?oldid=1600138"
Community content is available under CC-BY-SA unless otherwise noted.