Flight - Skyla can defy gravity and fly. She can also carry others while flying (especially Wander)

Levitation - Skyla can lift off the ground and float. 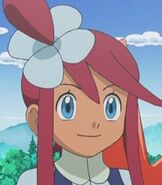 Add a photo to this gallery
Retrieved from "https://parody.fandom.com/wiki/Skyla_(Pokemon)?oldid=702921"
Community content is available under CC-BY-SA unless otherwise noted.