Deathstroke (Slade Joseph Wilson) is a fictional supervillain appearing in American comic books published by DC Comics. He is a mercenary and assassin who serves as the archenemy of the Teen Titans, specifically Dick Grayson. Over the years, writers have developed him as an adversary of other superheroes in the DC Universe as well, such as Batman and Green Arrow. 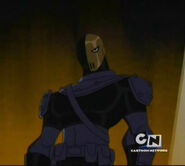 Add a photo to this gallery
Retrieved from "https://parody.fandom.com/wiki/Slade_Wilson/Deathstroke?oldid=2004771"
Community content is available under CC-BY-SA unless otherwise noted.