The Parody Wiki
Register
Don't have an account?
Sign In
Advertisement
in: Characters, Protagonists, HEROES,
and 13 more

Slimer made his debut in Ghostbusters. Blake Foster and the gang saw him at the Sedgewick Hotel. He got captured by the team. Later, Walter Peck shut down the containment unit freeing Slimer. Slimer was named "Slimer" by Mewtwo, just to annoy Rabbit. Blake Fosters Adventures of Scooby-Doo and the Witch's Ghost reveals that, although he was a former servant to Gozer and the Terror Dogs, he wasn't able to detect any evil from Ben Ravencroft. Mostly due to lures of food, as usual.

Slimer is a defensive character in Super Omega Bros. He loves fighting evil monsters with his friends. Probably has the same speed as Sonic. 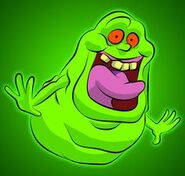