The Parody Wiki
Register
Don't have an account?
Sign In
Advertisement
in: Characters, Animals, North American Animals,
and 10 more

The slimy salamander (Plethodon glutinosus) has an extensive range throughout the eastern and central United States. Starting in central New York and the southern tip of Wisconsin, the range covers much of the eastern seaboard, moving southward to central Florida and the Gulf coast and westward to parts of east Texas and Oklahoma. It is notably absent from the lower Mississippi valley, presumably because flooding causes frequent disturbance to the preferred habitat of the slimy salamander in that region. 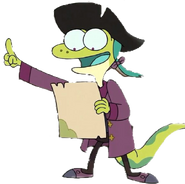