Smilodon gracilis was the smallest species of the Smilodon genus. It had a height of 1-1.2 m. (3.28-3.94 feet). The saber-like teeth were about 17.8 cm. (7 inches) long. Its legs were powerful and muscular. The hind limbs had strong adductor muscles. They may have stabilized its body while it was taking down prey. Smilodon gracilis had a proportionally short lumbar in its back. The hind limbs were shorter than the front ones. The three other species of Smilodon did not seem to have been especially fast runners. They probably hunted prey by stealth. This felid was able to open its jaws 120 degrees. It may have killed prey animals by biting into their necks. 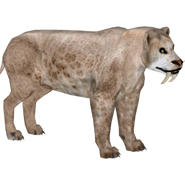