The Parody Wiki
Register
Don't have an account?
Sign In
Advertisement
in: Characters, Animals, Extinct Animals,
and 12 more

Smilodon populator was one of the most well-known prehistoric animals along with giants such as the Wooly Mammoth. It roamed the mid-western US and parts of both North and South America and were named for the enormous canines which skeletons show, protruded quite far out of their mouths. It became extinct in the Quanternary period and during the ice age. It is thought that S. populator would have roamed across the grassland plains and open woodlands throughout both North and South America where individuals would of varied slightly depending on the area which they inhabited. S. populator is one of the best known ice-age animals but little is really known about them as they are thought to have become extinct around 10,000 BC. However, next to the Smilodon fatalis and American Lion, it is one of the many amazing felids of prehistoric times.

American Lion and Smilodon vs Bison Latifrons by sameerprehistorica d6i200s-pre.jpg 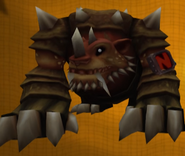