Start a Wiki
Waylon J. Smithers, Jr., often shortened to just "Smithers", is the assistant of Mr. Burns and althought normally not that bad a person he is obscenely loyal to Mr. Burns (to the point it is heavily implied he is gay) - although it is worth noting that Smithers is often the subject of abuse rather than malice on his own part: he is shown to have a jealous streak and can be rude and even (on occassions) physically violent towards those he dislikes and can be sneaky, in general though Waylon Smithers is somewhat the tertiary antagonist and a toadie rather than a fully-fledged evil-doer.

He played Kyle in Home(r)

Smithers with black skin and blue hair, as seen in "Homer's Odyssey"

Smithers dreams about Mr. Burns in "Marge Gets a Job." The censors had issues with the "lump in his bed." 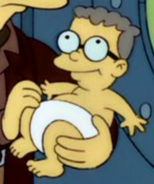 Smithers as shown in a halloween special. 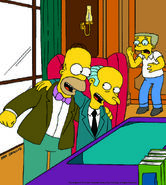 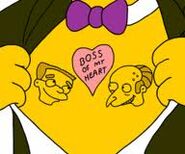 Smithers after being stung by a bee

Smithers as a friend of Malibu Stacy

An old Picture of Smithers with purple Hair and an Pointer

Add a photo to this gallery
Retrieved from "https://parody.fandom.com/wiki/Smithers?oldid=2222717"
Community content is available under CC-BY-SA unless otherwise noted.