Snooky Wookums is a villain character in Krypto The Superdog. He is a blue kitten. Though the character sounds like a girl, due to having a female voice actor, he is a boy.

He is an annoying alien

As Baby Alex in Madagascar 2: Escape to Africa GumballRockZ

He is Baby Alex

As Oliver in Snooky Wookums and Company

He is a orphan cat

As Young Simba in The Watterson King

He is a Lion Cub 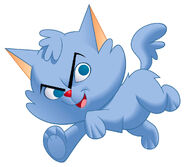 Add a photo to this gallery
Retrieved from "https://parody.fandom.com/wiki/Snooky_Wookums?oldid=660146"
Community content is available under CC-BY-SA unless otherwise noted.