The Parody Wiki
Register
Don't have an account?
Sign In
in: Sofia the First Characters, Characters, Females,
and 45 more

Princess Sofia is the titular protagonist of the Disney Junior animated series of the same name.

Sofia is a little girl with a commoner's background until her mother marries the King of Enchancia and she becomes royalty. Sofia learns that looking like a princess is not all that hard, but behaving like one must come from the heart.

She is an orphan who is adapted by Santa and Mrs. Claus

She is a tinker fairy

She is Little Bear's Friend 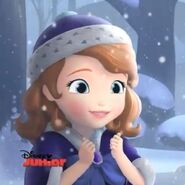 Elena and the Secret of Avalor Sofia James Royal Prep.jpg
"That was weird..."

Elena and the Secret of Avalor Crown of Aziluna.jpg

Sofia in her new gown

Sofia and her family back wearing their cuddly,soft,cozy royal clothes. 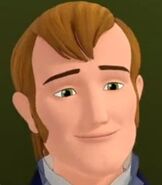 When You Wish Upon a Well 22.jpg
"Meow."
You're-telling-memaow.png
"You're telling me. Meow!"
Sofia isn't in Her Princess Form Yet.PNG

Sofia in Amber's arms
When You Wish Upon a Well 40.jpg
Waving bye, bye to Wormwood
Cat training.png
"Cat training!"
Sofia-and-Gwen-11.png
Cupcake maker.jpg
This is amazing!

Sofiafluke16.png
Sofia and Oona friends till the end of time

Dads and Daughters Day I love you too.jpg
"I love you, too"

The Secret Library - Tale of the Eternal Torch 7.png
The-Crown-of-Blossoms-3.png

The-Crown-of-Blossoms-11.png
The Crown of Blossoms 1.jpg

Sofia closes the book.
Community content is available under CC-BY-SA unless otherwise noted.