The Parody Wiki
Register
Don't have an account?
Sign In
Advertisement
in: Sofia the First Characters, Characters, Female Characters,
and 42 more

Princess Sofia (born October 6, 2005) is the titular protagonist of the Disney Junior animated series of the same name.

Sofia is a little girl with a commoner's background until her mother marries the King of Enchancia and she becomes royalty. Sofia learns that looking like a princess is not all that hard, but behaving like one must come from the heart.

She is governor's daughter.

She is a little girl

She is a tinker fairy

Sofia played Robyn Starling in Diego and Thumper: The Movie

She is an orphan who runs away from Aunt Figg

She is a lost girl and Wendy's daughter

She is Woody and the gang's current owner

She is a half-genie

Sofia as the Hippopotamus

Sofia as the Bear

Sofia as the Ape 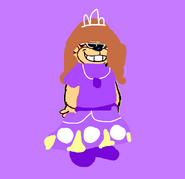