The Parody Wiki
Register
Don't have an account?
Sign In
Advertisement
in: Sega, 1990's Icons, SMW,
and 4 more

Sonic the Hedgehog is the title character and protagonist of the Sonic the Hedgehog video game series produced by Sega. He is a blue anthropomorphic hedgehog who has the ability to run at supersonic speeds, and attacks many of his enemies by curling into a ball. He most commonly achieves his goals by racing through levels, collecting power-up rings, and surviving against enemies and obstacles.

The character was created by programmer Yuji Naka and designer Naoto Ōshima, and his franchise debuted with the launch of its first game for Sega's Genesis console in 1991. Sonic became the official mascot of the company and one of the biggest power players of the 16-bit generation, establishing himself as a formidable rival to Nintendo's mascot, Super Mario. He is one of the most famous video game characters in the world, and his games have sold more than 80 million units worldwide. He has also appeared in spin-off comics and animated TV shows. 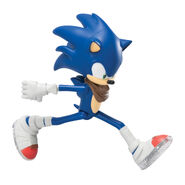 Sonic As He Made His Debut

Sonic Made His Debut In My Channel On February 4th 2017 In The Day Off And He Was Retired, But He Reappeared As Promotional Material For The Cancled Series Sonic Blast And The Season 2 Video The Widerness.

Sonic Was One The Orignal Characters When Channle Debuted