Professor Souichi Tomoe is the leader of the Death Busters, the founder and owner of Infinity Academy, a famous scientist, the father of Hotaru Tomoe and the husband of Keiko Tomoe. He becomes a Daimon in his last chapter, called Germatoid. This is the original depiction of the character created by Naoko Takeuchi.

he is Orochimaru's right hand

He is a Main Villian

He Played In Pokemon The First Movie (TR22P Human Style) 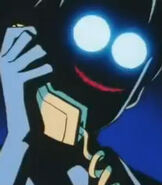 Add a photo to this gallery
Retrieved from "https://parody.fandom.com/wiki/Souichi_Tomoe?oldid=2000483"
Community content is available under CC-BY-SA unless otherwise noted.