The Parody Wiki
Register
Don't have an account?
Sign In
Advertisement
in: Pages with broken file links, Characters, Animals,
and 36 more

The southern black rhinoceros or Cape black rhinoceros (Diceros bicornis minor) is a subspecies of the black rhinoceros that was once abundant in South Africa from the Cape Province to Transvaal, southern Namibia, and possibly also Lesotho and southern Botswana. It was brought to extinction by excessive hunting and habitat destruction around 1850. It is unknown from where the original specimen (the holotype), on which Carl Linnaeus based "Rhinoceros" bicornis in 1758, was collected. It was even proposed that it was indeed the skull of an Indian rhino (Rhinoceros unicornis) with a faked second horn, as Linnaeus erroneously noted India as occurrence. This was fixed formally in 1911, when O. Thomas declared the Cape of Good Hope as type locality of D. bicornis. Therefore, this population formed the base of the nominal subspecies of the black rhinoceros. Later this subspecies became frequently mistaken for the south-western black rhinoceros, but the latter has to be considered a separate subspecies (D. bicornis occidentalis). D. bicornis bicornis was the largest of all black rhino subspecies. While the differentiation of subspecies is mostly based on skull and body proportions, as well as details of the dentition, the external appearance of the southern subspecies is not exactly known because no photos exist. The skull was the largest of any known subspecies and proportionally large compared to the body. The limbs were short but slender and the skin folds were probably only weakly pronounced. This subspecies was restricted to well-vegetated regions, in contrast to others that are well adaptated to desertic conditions. It is a popular species of rhino. 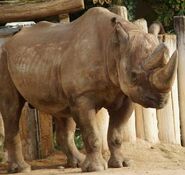 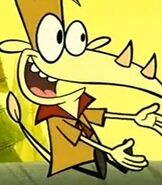 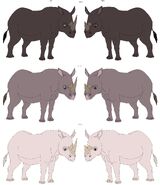