The South African bush elephant (Loxodonta africana africana) , also kown as the desert elephant, Southern African elephant or Transvaal elephant is a subspecies of the African bush elephant and therefore looks much like it. The males are 6-12 ft tall at shoulder height and weigh 5000-14000 pounds. The females are smaller than the males. The skin is a dark grey. Both males and females have tusks that grow 6-8 ft in length and appear at the age of 3. The ears are large and cover the shoulders. They weigh 110 pounds and measure up to 5 ft in height. The forehead slopes downward. The trunk is long, up to 7 ft, and can weigh 300 pounds. It has 40000 muscles and ends in two fleshy projections. The tail is short and weighs 22 pounds. The skull is large and filled with air sinuses, making it very light for its size. The legs are long with the bones filled with a spongy bone instead of marrow. The feet are cushioned with a thick, elastic, fatty substance. The heart beats 34 times per minute. The skin is .8-1.5in thick and is extremely sensitive to heat. The mouth contains 6 sets of 4 teeth that continually grow until they fall out. When the sixth set of teeth is gone, the elephant will starve and die, which is around the age of 50-60. The South African bush elephant is found in the forests of east, central and south Africa. They are active during the day and bathe 3-4 times each day. South African bush elephants spend 18-20 hours a day eating. They consume 350-500 pounds of food daily, although half of that does not get digested. They drink up to 50 gallons of water each day, using their trunks to slurp up 1.5 gallons of water and squirt it into their mouths. They eat grass, tree bark, shrubs, twigs, branches, fruit, flowers, thorns, soil to get minerals, and roots. South African bush elephants have no natural enemies. They are endangered due to the illegal poaching of their ivory. Sexual maturity is reached at 10 years-of-age. The gestation period is 22 months and they give birth to a single calf. The calves can walk at birth. They weigh 200 pounds and are 3 ft in shoulder height. They nurse for 3-4 years and are looked after by both the mother and midwives. They can eat solids at six months. The South African bush elephant is a subspecies of the African elephant along with the east African bush elephant, and west African bush elephant. They are all related to the Asian elephant and its subspecies. 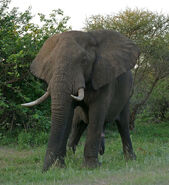 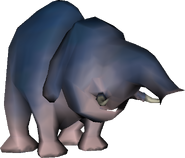 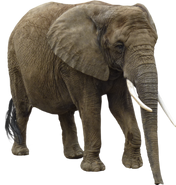 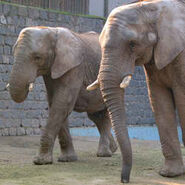 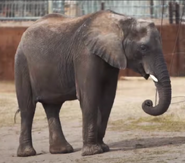 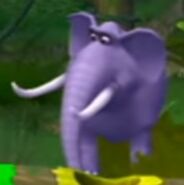 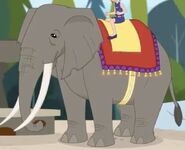 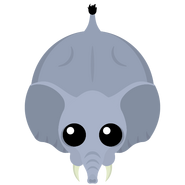