The southern black widow or simply black widow , and the shoe-button spider (Latrodectus mactans), is a venomous species of spider in the genus Latrodectus. The females are well known for their distinctive black and red coloring and for the fact that they will occasionally eat their mate after reproduction. The species is native to North America. The venom is rarely fatal to healthy humans. The southern widow is primarily found in, and is indigenous to the southeastern United States, ranging as far north as Ohio and as far west as Texas. The northern black widow (L. variolus) is found primarily in the northeastern United States and southeastern Canada, though its range overlaps with that of L. mactans. In Canada, northern black widows occur in the southern parts of British Columbia, Alberta, Saskatchewan, Manitoba, and Quebec.) In the Dominican Republic, L. mactans is found throughout the whole country 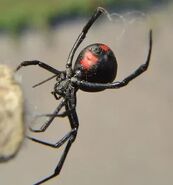