The Parody Wiki
Register
Don't have an account?
Sign In
Advertisement
in: Characters, Animals, Antarctic Animals,
and 11 more

The southern giant petrel (Macronectes giganteus), also known as the Antarctic giant petrel, giant fulmar, stinker, and stinkpot, is a large seabird of the southern oceans. Its distribution overlaps broadly with the similar northern giant petrel, though it overall is centered slightly further south. Adults of the two species can be distinguished by the color of their bill-tip: greenish in the southern and reddish in the northern. This and its sister species are the largest members of the Procellariidae. The southern giant petrel measures 86 to 99 cm (34–39 in) with a wingspan of 185 to 205 cm (73–81 in). Both this and the northern giant petrel vary considerably in size, with southern colonies averaging larger than northern colonies, in line with Bergmann's rule. Due to the large amount of size variability, it is difficult to determine which is the larger species, but the largest-bodied colonies of the southern species are slightly larger on average, in both mass and linear dimensions, than the largest in the northern giant petrel. Body mass can vary widely, from 2.3 to 5.6 kg (5.1–12.3 lb), with males averaging larger than females. The largest average weights come from Macquarie Island, where 20 males averaged 5.14 kg (11.3 lb) and 21 females averaged 4.2 kg (9.3 lb). On the South Orkney Islands, 37 males averaged 4.94 kg (10.9 lb) and 37 females averaged 3.85 kg (8.5 lb). In contrast, in Patagonia, 15 males averaged 3.5 kg (7.7 lb) and 21 females averaged 2.5 kg (5.5 lb). However, another study from Patagonia, found that 26 males averaged 4.2 kg (9.3 lb) and 27 females averaged 3.7 kg (8.2 lb). They have a very large yellow bill, with a green tip and greyish-brown legs. There are two different morphs, the dark which resembles the northern giant petrel, and the more distinct light morph. On the dark morph the upper breast, head and neck are light with the remainder of its plumage being mottled brown. The leading edge of its wing is lighter as is the base of the inner primaries, on the underside. The light morph is rarer and very distinct with only slight black speckles on an otherwise all white look. As juveniles, the dark morph starts off more sooty brown and pales as it ages. Both giant petrels have strong legs and can move around on land effectively. Finally, when in flight this species has a somewhat hunchbacked appearance. It, like all members of the Procellariiformes, have features that set them apart from other birds. First, they have nasal passages called naricorns, that attach to the upper bill. The nose holes on the petrels are on the top of the bill. The bills of all Procellariiformes are also unique in that they are split into between seven and nine horny plates. They produce a stomach oil made up of wax esters and triglycerides that is stored in the proventriculus. This can be sprayed out of their mouths as a defence against predators and used as an energy rich food source for chicks and for the adults during their long flights.[10] They have above the nasal passage a salt gland, which helps to remove salt from their blood; this salt, primarily sodium chloride, is in their marine invertebrate food and in the large amount of ocean water that they imbibe; it excretes a concentrated salt solution from the nostrils. 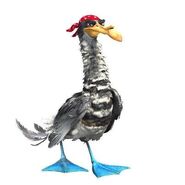